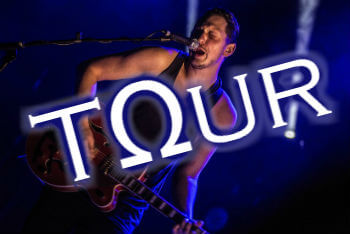 One band many performances and almost infinite twists and turns in style. Standing on this line of thought it’s hard to forget Olympique’s memorable appearance in the Burgtheater. Their first album hadn’t even come out yet, but the night was sold out. “The theater was packed, but yet it was so dark we couldn’t see a single face. It was like playing in a black hole” – the lead singer recalls. The crowd just took the musicians at face value only to be overwhelmed by their huge talent. “The mesmerizing effect our music has stays the same regardless of the place we’re in. Ever since we started, we had an eye for remarkable melodies” – they all seem to agree.

Firing Up Pretentious Listeners and the Blissfully Ignorant in the Same Breath – How is this Possible?

The Salzburg band also had the special honor to open the Frequency Festival 2014. Although just a warm-up performance, Olympique band (a trio at the time) gave its all and finished strong in front of the sparse audience. FM4’s prestigious festival normally takes place in the summer between 16th to 19th of August. What the group chose to give a start to the festival was their signature song “Awolnation”. A song they first performed live in Salzburg at the Red Bull Brandwagen. These performances were amongst the most exciting ones, as Olympique played in front of a crowd with more than a smattering of music. “The jazz police”, as drummer Nino calls them, was apparently very impressed with what the band had offered. No wonder the guys from Salzburg were featured in a number of other subsequent shows.

It wasn’t just the big events that left a mark in Olympique’s career. Their pre-listening session in Supersense, located in the heart of Vienna, was also superb. With an artisan touch, they even managed to film a vinyl record, live, in front of a small audience. To top things off, Schleichenost designed the cover right there on the spot. Not by coincidence, he was also involved in the visual editing of the clip.

The chaps from Austria headed straight into the Amadeus Austrian Music Awards off the back of a crazy start of 2015. There, they almost hit the nail on the head being nominees in the Alternative Pop / Rock category. Which is apropos their preferred style.

The Final Conquest of Olympique or Is There More in Store for the Future?

That wasn’t the case in Olympique band tour around Austria the late 2017 as they were spreading the word about their hip-hop -inspired album “Chron”. Rightly called “an amazingly shrewd” album, it took by storm the fans in six cities all over the country, starting from Dornbirn and symbolically ending in Vienna. Although placing high demands for their music, Olympique’s Fabian Woschnagg have a signature way of breaking the ice between the band’s ideology and the dubious public.

The audience thoroughly enjoyed fantastic power chords as well as dreamy, quietly overtaking melodies, all of which came to show the guys’ amazing arsenal and music literacy. The band really made a stand with a revamped mixture of styles and techniques. So as to catch even the pop-oriented folks.

The latest and greatest of the band was seen in Deutschland in early 2018, which was a follow-up to their “Chron” promotion. The plot around this mystery-band thickens the more time passes by, but they never fail to disappoint with an unexpected come-back. The drummer Nino attempts to sum up the quest of Olympique like so:

The last song of the album asks the question “Will it be alright?” and we can never lay to rest these concerns of ours. I hope we ought to find what we’re looking for as musicians and as individuals, until then our search continues.

Get Ready to ROCK!